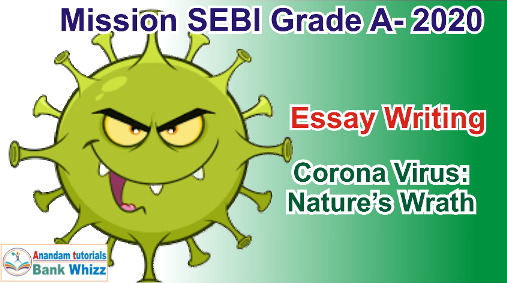 Today’s civilization is “playing with fire”. It is almost always human behaviour that causes diseases for humans.

“Nature is sending us a message with the corona virus pandemic and the ongoing climate crisis.Humans are placing too many pressures on the natural world with damaging consequences, and warn that failing to take care of the planet means not taking care of ourselves.”

Nature projects its wrath through various means. It causes deadly earthquakes, devastating floods, droughts, bushfires, volcanic eruptions, famines, pandemics and the other. If we take a look at the data the death tolls caused by natural disasters of last 20 years, more than 12,00000 (1.2 million) people have been killed including the pandemic caused by the Corona Virus (data till March 2020). The data of the loss of animals and birds are beyond imagination.

Not going back far The first accident that was the wrath of Nature when the Australian bushfires broke out in the year 2019 killing a record number of animals, burning crores of trees to ashes.

The second wrath of nature is witnessed in Kenya, Ethiopia, Somalia, Digibouti, Eritrea and Uganda where locust invasion has been going on for years plaguing the lives over there. By January 2020, the data from the UN Food and Agriculture Organization (FAO) estimated nearly 110,000 hectares were affected by the desert locust crisis in the Horn of Africa. This sends a serious message to the world community to stop overexploitation of Nature.

Thirdly we can mention the outbreaks of diseases in the recent past such as Ebola, bird flu, Middle East respiratory syndrome (Mers), Rift Valley fever, severe acute respiratory syndrome (Sars), West Nile virus and Zika virus. All these turned out to be epidemics, which killed thousands of lives. It is worth mentioning here that 75% of all emerging infectious diseases come from wildlife.

We can never fail to mention COVID-19 which has been declared a Pandemic by the World Health Organisation. This pandemic has taken away more than 30,000 human lives so far and is still spreading far and wide. All the mentioned diseases have been transmitted from animals and birds to humans who have shown atrocities against the Nature’s creations. Reports say that the diseases from wildlife have much higher fatality rates in people, such as 50% for Ebola and 60%-75% for Nipah virus, transmitted from bats in south Asia. This as a clear warning shot.

To prevent further outbreaks, both global heating and the destruction of the natural world for farming, mining and housing have to end, as both drive wildlife into contact with people.

The authorities of countries must be urged to put an end to live animal markets and the illegal global animal trade.

China has banned such markets but this must be permanent. However, this needs to be done globally. There are wet markets throughout much of sub-Saharan Africa and a lot of other Asian countries too.” The ease of travel in the modern world exacerbates the dangers.

If we don’t take care of nature, we can’t take care of ourselves. And as we hurtle towards a population of 10 billion people on this planet, we need to go into this future armed with nature as our strongest ally. It’s almost always a human behaviour that causes it and there will be more in the future unless we change. “We’ve had Sars, Mers, Covid-19, HIV so on and so forth. We need to see what nature is trying to tell us here. We need to recognise that we’re playing with fire.