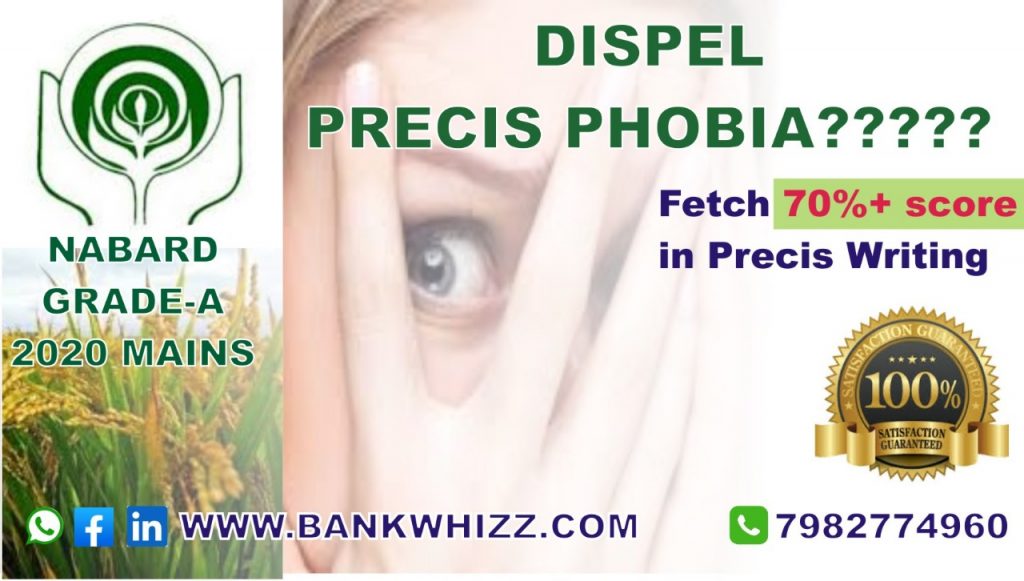 In this busy world where people are overburdened with a good pressure of work, the art of Precis writing can stand in good stead to express our views in brief.

Précis writing means just seizing the essential points of a story and putting them together in clear and readable shape.

Précis is to be written in 1/3 words of the original passage or paragraph in your own words. You are suggested that you should pour the author’s thought not yours in the précis without any unnecessary trimmings.

Keep in mind the following Tricks to compress the Idea of the passage:

a)      One word for many words including Phrases, Idioms, One word Substitution

I became euphoric on hearing the new of my project being approved without any objection.

On being asked about his father, the child’s mother told him of his (father’s) death.

To me, he is not a better match for the girl for marriage.

I request you to return home by 12 so as to see whether it suits you.

To learn this, you should learn the art of Synthesizing sentences.

I don’t know where to go in this dark, horrible night.

There was a dog who was crossing a stream. He had a piece of bone in his mouth. He saw his image in the stream. He took it for another dog. He opened his mouth to bark. The bone fell from his mouth into the water.

A dog, with a piece of bone in his mouth, was crossing the stream when, on seeing his own image, he opened his mouth to bark and lost the piece of bone.

Sir Issac Newton, after deep meditation, discovered that there was a law in nature called attraction, by virtue of which every particle of matter that the world is  composed of draws towards itself every other particle of matter with a force which is proportionate to its mass and distance.

Sir Issac Newton discovered the law of gravitation which accounts for the attraction of all material bodies towards each other.

Speech is a great blessing, but it can also be a great curse, for while it helps us to make our intentions and desires known to our fellows, it can also, if we use it carelessly, make our attitude completely misunderstood. A slip of the tongue, the use of an unusual word, or of an ambiguous word, and so on, may create an enemy where we hoped to win a friend. Again, different classes of people use different vocabularies, and the ordinary speech of an educated man may strike to an uneducated listener from what it does to men of our own class. Thus speech is not a gift to use lightly without thought, but one which demands careful handling; only a fool will express himself alike to all kinds and conditions of men.

Let us proceed in the manner we have been talking about to make a good précis of it. What does the passage deal with? The first reading will give you the answer: the writer is talking about speech being both a blessing and a curse.

What are the key words, clauses, and sentences? When you read the passage again, you will underline the following: “Speech is a great blessing but it can also be a curse….” “….different classes of people use different vocabulary….’ And ‘Thus speech is not a gift to sue lightly without though but one which demands careful handling….”

What are the main points? We may jot down the following:

(3)    Words do not always convey the same meaning to all people.

Now if you put these points in continuous form in your own words your précis should read something as follows:

Speech is a valuable gift, but if we are to make ourselves understood, it should be used carefully, since we may distort our meaning not only by a careless use of words, but by ignoring the fact that words do not always mean the same thing to all people.