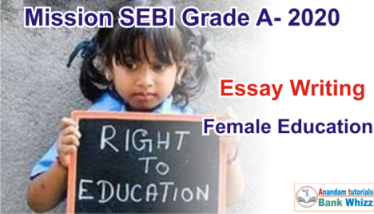 Female Education is a term used to provide education to women irrespective of any caste, creed or social status. It includes areas of gender equality and access to education and its connection to the alleviation of poverty.

Though the overall literacy rates have risen multi-fold in India since Independence from around 18 percent in the 1950s to 74 percent in the last Census. But the averages hide the vast disparities. Female literacy is particularly wanting in the country as a significant.

The Indian government has expressed a strong commitment towards education for all, however, India still has one of the lowest female literacy rates in Asia. The female literacy rate is at around 60 percent, which is 22 percentage points below the world average.

In ancient India, during the Vedic age, women were given education in the same way as men. It was during the Muslim period that women began………… For the Complete Model Essay and a list of other model Essays click here